SAT (Scholastic Assessment Test) is a standard test, used for taking admission to undergraduate programs of universities or colleges of the United States. SAT is developed and published by the College Board, an organization in the United States, administered by the Educational Testing Service. In this article of AKVTutorials, you will get Kaplan SAT Prep Plus Course Book Review | Practice Test 19 AMBiPi.

Kaplan is enormous publishing company that releases various books and course for the SAT preparation and hence it following books for SAT preparations.

Check Price On Amazon
In this SAT prep book, there are following sections are made in each chapter.

“Try on Your Own”

“How Much Have You Learned?”

Kaplan strategies provides a direction for the SAT preparation and explain each and every skill which is required for creaking SAT exam.

Hence, if you invest more in the preparation for SAT by studying Kaplan SAT practice questions sets, the greater your chances of getting higher SAT score and then you will be very close to get admission into your top-choice colleges.

In SAT exam, different questions of different topics are asked, which has different number of points (means SAT scores).

By analyzing these topics, Kaplan contains all those topics which are very close to appear in SAT papers.

Now, to master these topics, you need to earn a number of Smart Points on SAT test day.

Kaplan uses a 600-point scale for Smart Points in SAT prep plus book. The distribution of these points is as below.

In Heart of Algebra of Kaplan SAT Book, Analyzing and solving equations and systems of equations; creating expressions, equations, and inequalities to represent relationships between quantities and to solve problems; rearranging and interpreting formulas. 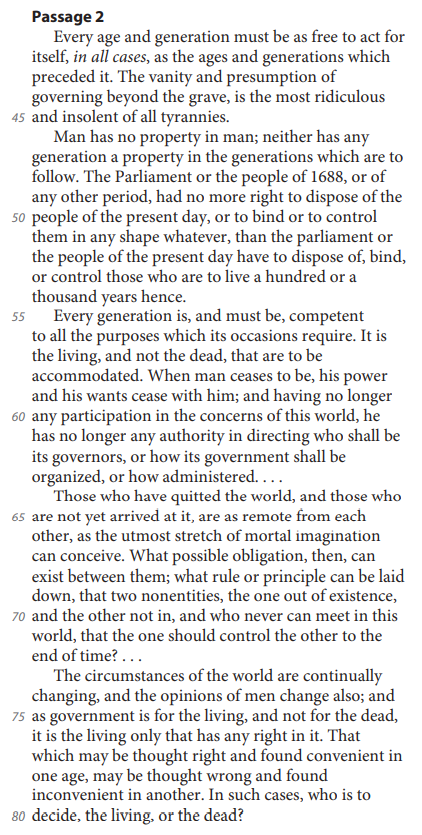 In Passage 1, Burke indicates that a contract between a person and society differs from other contracts mainly in its

Option A: brevity and prominence.

Option B: complexity and rigidity.

As used in line 4, “state” most nearly refers to a

Option A: style of living.

Option B: position in life.

Option A: generally helpful to those who want to change society.

Option B: surprisingly difficult for many people to comprehend.

How would Paine most likely respond to Burke’s statement in lines 30-34, Passage 1 (“As the…born”)?

Option A: He would assert that the notion of a partnership across generations is less plausible to people of his era than it was to people in the past.

Option B: He would argue that there are no politically meaningful links between the dead, the living, and the unborn.

Option C: He would question the possibility that significant changes to a political system could be accomplished within a single generation.

Option D: He would point out that we cannot know what judgments the dead would make about contemporary issues.

Which choice best describes how Burke would most likely have reacted to Paine’s remarks in the final paragraph of Passage 2?

Option A: With approval, because adapting to new events may enhance existing partnerships.

Option B: With resignation, because changing circumstances are an inevitable aspect of life.

Option C: With skepticism, because Paine does not substantiate his claim with examples of governments changed for the better.

Option D: With disapproval, because changing conditions are insufficient justification for changing the form of  government.

Which choice best states the relationship between the two passages?

Option A: Passage 2 challenges the primary argument of Passage 1.

Option B: Passage 2 advocates an alternative approach to a problem discussed in Passage 1.

The main purpose of both passages is to

Option A: suggest a way to resolve a particular political struggle.

Option B: discuss the relationship between people and their government.

Option D: describe the duties that governments have to their citizens.