SAT (Scholastic Assessment Test) is a standard test, used for taking admission to undergraduate programs of universities or colleges of the United States. SAT is developed and published by the College Board, an organization in the United States, administered by the Educational Testing Service. In this article of AKVTutorials, you will get Princeton SAT Prep Course Book Review | Practice Test 28 AMBiPi.

This passage is adapted from Elsa Youngsteadt, “Decoding a Flower’s Message.” ©2012 by Sigma Xi, The Scientific Research Society. 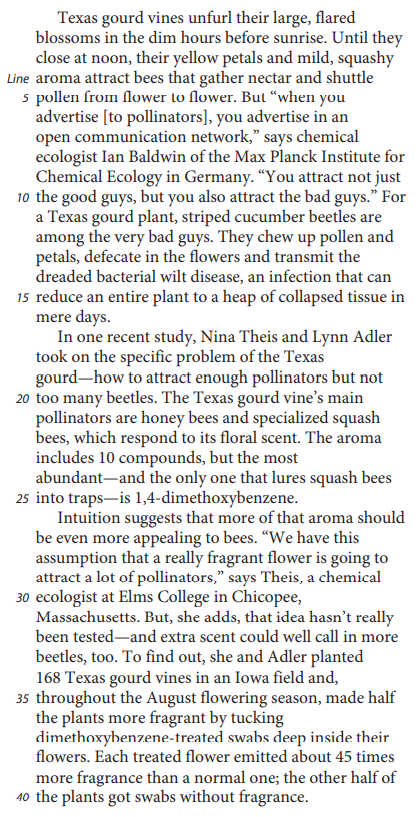 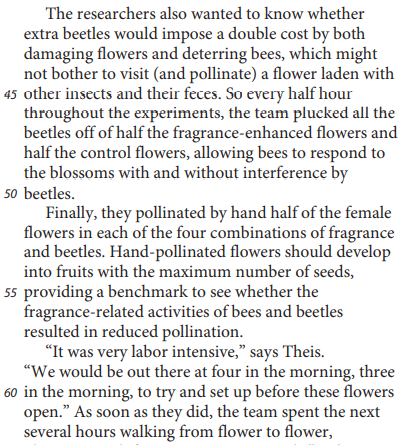 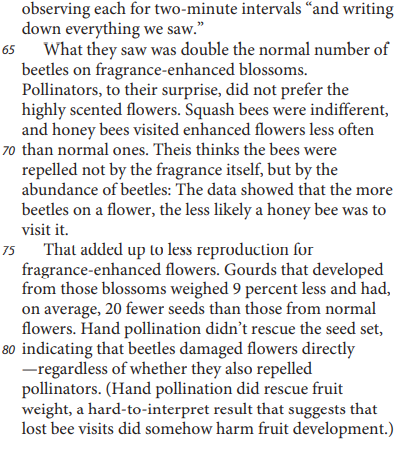 The primary purpose of the passage is to

Option A: discuss the assumptions and reasoning behind a theory.

Option B: describe the aim, method, and results of an experiment.

Option C: present and analyze conflicting data about a phenomenon.

Option D: show the innovative nature of a procedure used in a study.

As presented in the passage, Theis and Adler’s research primarily relied on which type of evidence?

Which statement about striped cucumber beetles can most reasonably be inferred from the passage?

Option A: They feed primarily on Texas gourd plants.

Option B: They are less attracted to dimethoxybenzene than honey bees are.

Option C: They experience only minor negative effects as a result of carrying bacterial wilt disease.

Option D: They are attracted to the same compound in Texas gourd scent that squash bees are.

Option A: did not have aromatic flowers.

Option B: targeted insects other than bees.

As used in line 38, “treated” most nearly means

What did Theis and Adler do as part of their study that most directly allowed Theis to reason that “bees were repelled not by the fragrance itself” (lines 70-71)?

Option A: They observed the behavior of bees and beetles both before and after the flowers opened in the morning.

Option B: They increased the presence of 1,4-dimethoxybenzene only during the August flowering season.

In describing squash bees as “indifferent” (line 68), the author most likely means that they

Option A: could not distinguish enhanced flowers from normal flowers.

Option B: visited enhanced flowers and normal flowers at an equal rate.

According to the passage, Theis and Adler’s research offers an answer to which of the following questions?

Option A: How can Texas gourd plants increase the number of visits they receive from pollinators?

Option B: Why is there an upper limit on the intensity of the aroma emitted by Texas gourd plants?